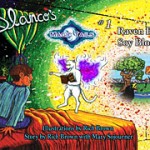 (Sedona, AZ) – Rich Brown, Author and Illustrator, announces his children’s book series Blanco’s Magic Tails.  The series are a culmination of stories from Egyptian Mythology, Taoism, I-Ching, Norse and Celtic Mythology, Native
American Mythology, Shamanism, Dragon Lore and more.  This age appropriate Magic Tails series is a collection of magical stories for kids , starting at age seven (7)  that teaches them to respect and love the Earth, the wisdom of listening to their dreams, and how to see magic everywhere around them.

The first book (always available free), Blanco’s Magic Tails #1 – Raven Birth, Soy Blossom, is available at www.magictails.com.  In this book, kids are taken into a magical dream realm where a boy named Lars learns how the world was created.

In this series, children learn invaluable lessons about respect of others and the earth, worldwide cultures, both modern and ancient, comparative religions, tolerance, wisdom and more.

While the first book is always free, the other 5 books in the series are available in a packaged set for $39.95. Explore Magic Tails to find more entertaining and educational stories – and get your free download of the first one!

About the Author: Richard Brown, Author and Illustrator, has been working on Magic Tails since August, 1997. In 1994, he began studying mythologies from every culture, shamanism, Chinese and Western astrology and the power held in our dreams.

Born and raised in the Kittitas Valley in Washington State, Rich moved to Flagstaff, Arizona in June 1995 where a special cat named Soy was brought into his life by his friend Ravven.  These stories were inspired by Soy and her son Heimdall, a series of dreams, and the many mythologies of the world. Rich is also an active musician and is working on the soundtrack/musical score to Blanco’s Magic Tails.

Want to join the discussion?
Feel free to contribute!